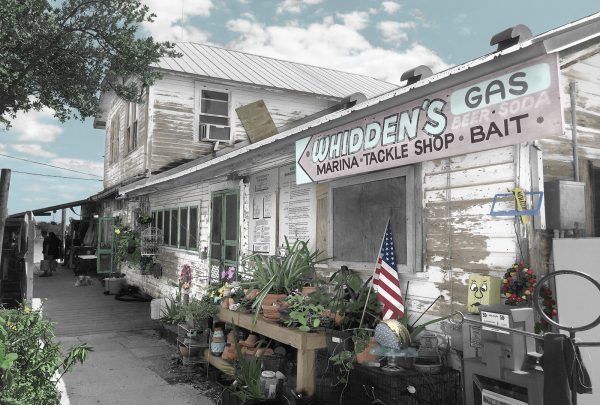 Click the image to view large
Photographic Story When we first came to Florida back in 1978, Whidden’s Marina, on Gasparilla Island, was among the first marinas we visited as we sailed the coast of Florida. I immediately fell in love with the old building and the comfortable feeling of the folks who ran the marina. Back then, the town of Boca Grande was a tiny, slow, easy-going area on the island with not much going on. Many years later, after we moved to Florida, Whidden’s Marina was one of the first places I wanted to return. The marina was still the comfortable old place I remember, but the island had grown in population and sophistication. There wasn’t the same ambiance as when we first discovered Boca Grande. Nevertheless, I photographed it and hand-painted an image of the marina in 1984. Last year, 2019, I returned, hoping that the marina was still there, and it was! Whidden’s marina was built by Sam Whidden in 1926 and has been run by the Whidden family ever since. It is one of Boca Grande’s oldest marinas, and back in those early days, it was also well known as a Boca Grande nightspot. It had a dance hall and restaurant. Today the marina is a location where you can hire fishing guides and also purchase bait. They have set aside one of the interior rooms as a museum of memories. Wonderful! But, best of all, it has been placed on the National Register of Historic Places, so it is safe from a developer. The Art of Hand Painting Black and White Photographs Photographed with a Sony digital camera and instead of oil painting with Q-tips and cotton balls, Niki was able to paint using Photoshop. Changing from the old-fashioned way of doing her art, to the new ‘fashion’ of using technology was challenging, but she’s enjoying getting back to her own personal expression. Archival Print Making Niki’s open edition gicleé artwork is printed on Sunset Bright Velvet Rag matte finish paper using eight archival inks. A state-of-the-art Epson Stylus Pro printer creates deep, rich dark values that hold subtle detail in the shadows as well as bright vivid colors that are truly tropical.